My passion is crafting beautiful instruments. Here in my workshop in Roßhaupten / Allgäu I carry on the centuries old tradition of making violins, violas and cellos by hand. Much of the aged tonewood I use grew locally here in the alps and I custom make unique instruments of the highest quality tailored to individual customer wishes.

My passion is crafting beautiful instruments, but my greatest satisfaction comes from knowing they are appreciated, cherished and played by musicians.

Extensive restoration work of many old, valuable instruments made by the Italian masters has honed my repair skills and craftsmanship. I have been fortunate to gain many years of experience in the art of violin making in different locations around the world, which enables me to realize the maximum potential of the wood and obtain the best possible sound for each instrument. 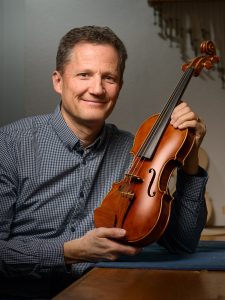 1997 Masters Degree in Violin Making and Repair in Munich, Germany. Graduated with honors and special recognition for excellent workmanship. Certificate of Achievement from Bavarian State Government..

2007-2012 Own Workshop in Jordans, England. Restoration and Repair.

Since 2012 own Workshop in Roßhaupten, Germany. Reviving of the local tradition of instrument making. New making, restoration, sound improvements.Verbesserungen.

My workshop is perfectly equipped for new making, repair and restoration of stringed instruments. For most of my work I use only hand tools. This enables me to feel how each individual piece of wood needs to be treated in order to achieve the very best results.

In a separate room musicians can try out one of my instruments or play their own.

Please click on the map to see a larger version.

In case you want to use the Google Maps service, please click this link. Disclaimer: clicking the link will connect you to the servers of Google Inc., USA. Personal data, in particular your computer’s unique IP-address, will be transferred to these servers in order to provide you this service. By clicking this link you give your consent to this data transfer.